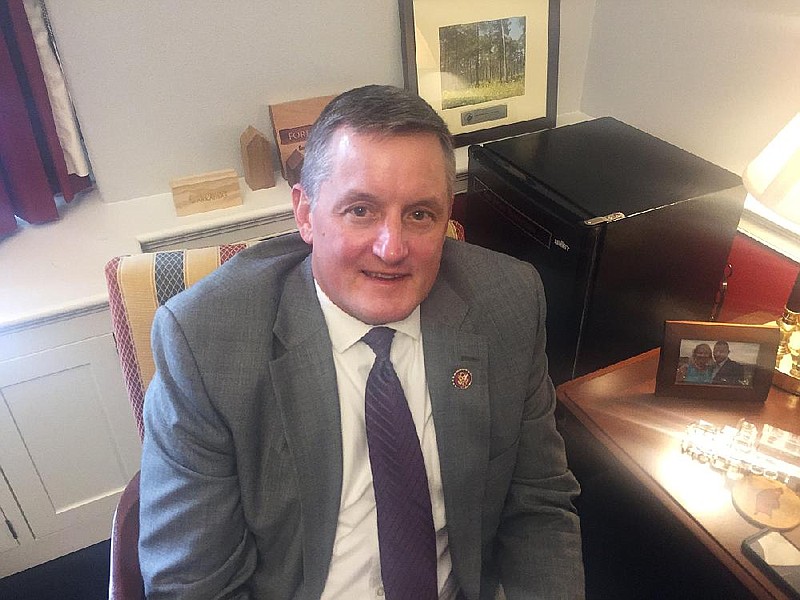 The Hot Springs Republican is part of a bipartisan group of congressional members who introduced bills last week that advocates say would make federal prosecution and sentencing of children more age-appropriate.

Other leaders in the effort are U.S. Reps. Karen Bass and Tony Cardenas, both California Democrats, who have introduced separate juvenile justice legislation, according to a news release last week.

During the Arkansas congressman’s 2019 attempt to pass the measures, they did not receive a vote. This time, he says he has high hopes his bill will pass because it has bipartisan sponsorship.

“Reforming the juvenile sentencing process is overdue in the U.S,” says a 2019 statement from Westerman’s office. “For too long, we’ve thrown young people into the justice system with an inadequate understanding of why crimes occur and what can be done to appropriately address them.”

Bass and Cardenas spoke about their bills at a news conference Wednesday. Westerman was unable to attend, but expressed support by video.

“We’re going to keep working on it because I think it’s something that is important,” Westerman said in an interview Friday. He added that his proposed law is largely based on Arkansas state law.

The package of bills also aims to reverse decades-old policies that allowed the incarceration of a disproportionate number of children of color, representatives and advocates said at the news conference.

James Dold, chief executive officer and founder of Human Rights for Kids, said current policies “disregarded child status.” His nonprofit, based in Washington, D.C., promotes rights protection for children, according to its website.

“These laws from the 1990s are outdated,” Bass said. “They never should have happened to begin with, and they are certainly outdated now.”

Westerman’s House Resolution 2858, titled “Sara’s Law and the Preventing Unfair Sentencing Act of 2021,” deals with cases in which children are abused, assaulted or trafficked and use violence to escape.

The bill gives courts the authority to dole out sentences that are below federal minimums when taking into account young offenders’ ages and the trauma they have experienced.

In his video, Westerman recounted the story of Sara Kruzan, who was groomed for prostitution beginning at age 11 in California. When she was 16, she killed her abuser and was sentenced to life in prison without parole.

“That just doesn’t seem like justice to me,” Westerman said.

Kruzan was released in 2013, 19 years after the killing, after former Republican Gov. Arnold Schwarzenegger commuted her sentence.

Westerman’s bill would also allow federal courts to impose a sentence that is 35% below a statute’s minimum if the offender is a child. It also would end life sentences without parole for kids in federal court. Youths given a life sentence would be eligible for a parole hearing after 20 years in prison.

In 2017, the Arkansas Legislature passed Act 539 that ended life without parole for juveniles. Many other states have also banned the practice.

Laura Berry, who spoke at the news conference, was released from an Arkansas prison on parole because of the state law’s passage. Sentenced to life in 1985 for first-degree murder, she was the first person released under the law, she said.

“I think overall the package is a recognition that people are trying to get out of situations and the protections are there [in the bills] for them,” said Tom Massau, director of Disability Rights Arkansas. “I think it’s recognition that’s positive that we’re moving in that direction at a federal level.”

Massau’s Little Rock-based group is federally mandated to monitor the treatment of people with disabilities, including at juvenile lockups in Arkansas.

Incarcerated as a teen, Berry described her time in an adult prison as the “scariest thing I can ever think of.” She now works with DecARcerate, a nonprofit that advocates for the rights of the incarcerated, and for juvenile justice changes.

“For all the right reasons, I support this package and everything it’ll mean for the people we’ve left behind,” she said.

Bass’ bill would place considerations such as age and trauma on federal court decisions to put juveniles into adult correctional facilities. It would also change the minimum age from 15 to 16 for prosecuting children as adults, among other measures, she said.

Cardenas’ bill would require minors to consult with legal counsel before waiving their Miranda rights, require law enforcement to contact guardians when children are arrested, and ensure legal counsel is present during the interrogation of a child, among other measures, according to a news release.

Westerman said that while “in general” he supports the other bills announced at the news conference, he needed to review them as well as what was discussed at the conference.

Arkansas juvenile justice experts said they support the bills, and that the legislation reflects best practices.

“I think the package of legislation that they have introduced really does recognize that our current federal juvenile sentencing laws are outdated,” said Rich Huddleston, executive director of Arkansas Advocates for Children and Families.

He added that the legislation shows a “clear assumption” that children are different from adults, which should be considered in sentencing.