Today, the Bureau of Justice Statistics released its latest counts of people incarcerated in state and federal prisons and in local jails, and offered some good news. During 2015, the state and federal incarcerated populations declined by 2%, more than it has any year since the Bureau started tracking annual change in 1978. But relative to the exponential growth in the 1980s and 90s, the recent decline in the incarcerated populations has been frustratingly slow. Worse, the “record” decline is in large part the result of one-time changes in the federal system.

Almost half (40%) of this year’s prison population decrease is thanks to a dramatic drop in the federal prison population. In particular, a large-scale, one-time release of 6,000 non-violent drug offenders last fall accounts for 17% of the overall decline.

We updated our chart of incarcerated population counts over time to reflect the most recent estimates and demonstrate where the emphasis of our reform efforts needs to be: in the states. 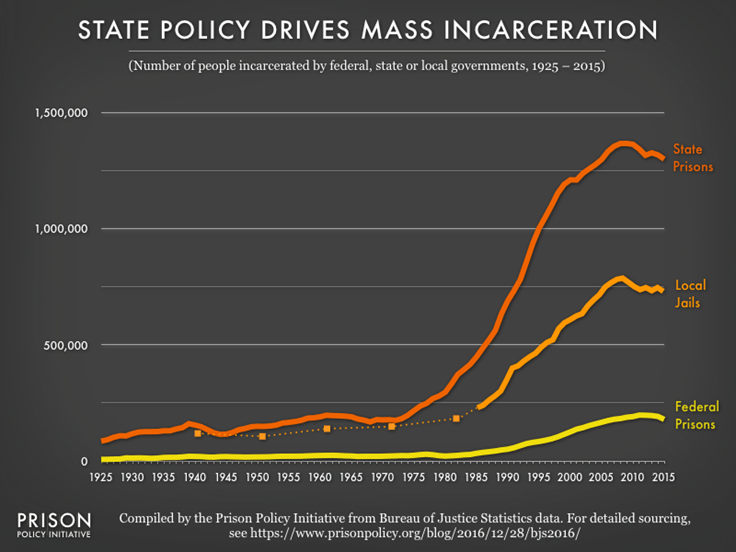 As we noted in our original report on state prison growth, the vast majority of incarcerated people are locked up in state prisons. The justice policies of the 1980s and 1990s led to nearly three decades of mass incarceration, which was concentrated in state and local facilities. Of course, state policies vary significantly, so aggregating them masks the tremendous differences between the states with growing and shrinking prison populations.