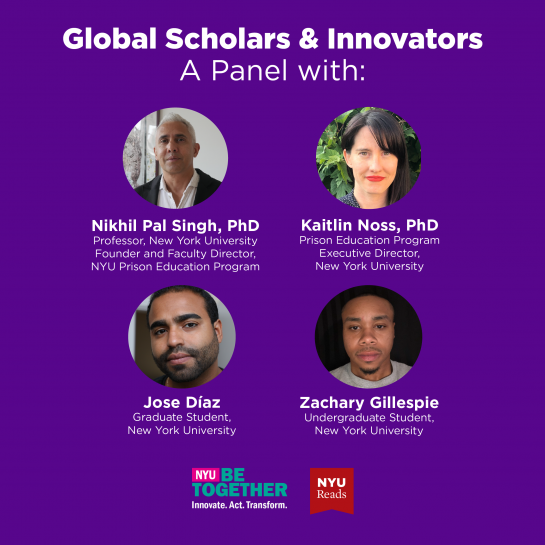 Join us for our next featured event in the NYU BeTogether Global Scholars & Innovators Series: A Panel Discussion with Nikhil Pal Singh, Kaitlin Noss, Jose Díaz, and Zachary Gillespie on “Racial Justice and Prison Education.”

Add to my calendar

NYU Reads in partnership with the Office of Global Inclusion, Diversity, and Strategic Innovation (OGI), NYU Libraries, the Office of the Provost, NYU Press, NYU Skirball along with School-based partners, and other offices across NYU.

About Dr. Nikhil Pal Singh: Dr. Nikhil Pal Singh is a historian of race, empire, and culture in the 20th-century United States, Dr. Singh is the author, most recently, of Race and America’s Long War(University of California Press, 2017). He is also the author of the award-winning book, Black Is a Country: Race and the Unfinished Struggle for Democracy (Harvard University Press, 2004), and author and editor with Jack O’Dell of Climin’ Jacob’s Ladder; The Black Freedom Movement Writing of Jack O’Dell. Dr. Singh’s writing and historian interviews have appeared in a number of places including New York Magazine, TIME, the New Republic, and on NPRs Open Source and Code Switch.

Dr. Kaitlin Noss completed her PhD in American Studies at NYU in 2020, and her MA degree in Sociology and Equity Studies in Education, and certificate in Adult Education from University of Toronto in 2011. She joined PEP as Executive Director after 13 years at Prescott College, where she taught and helped to establish the Maasai Community Partnership Program for Indigenous land rights research, and the Social Justice and Community Organizing Master’s Program. The latter trains students in critical theory and organizing, while coordinating real-time grassroots campaigns through partnership with movement organizations in Arizona. Dr. Noss is excited to bring her abolitionist commitment to pedagogy and educational justice to the team of students, staff, and faculty at PEP

Jose Díaz is a Master’s student majoring in Social and Cultural Analysis with an emphasis on Latino Studies at NYU. In his thesis work on Stickball he seeks to unravel colonial narratives that underlie our common notions of race, class, and gender, and how those ideas inform public space and human interaction. He is also a writer and public speaker, using the power of storytelling to highlight his personal struggles with incarceration while challenging theoretical postulations about the carceral system. Through this work, he aims to advocate and educate on the importance of inclusivity within prison initiative programs and higher education.

Zachary Gillespie is a native of New York City. He is majoring in Social and Cultural analysis with an emphasis on American Studies. Zachary is also an alumnus of The New York University Prison Education program. His academic interests include anything associated with race and the criminal justice system. He is a self-proclaimed “Abolitionist.” He believes the first step towards abolition is education. His hobbies include cooking, reading, and watching sports.