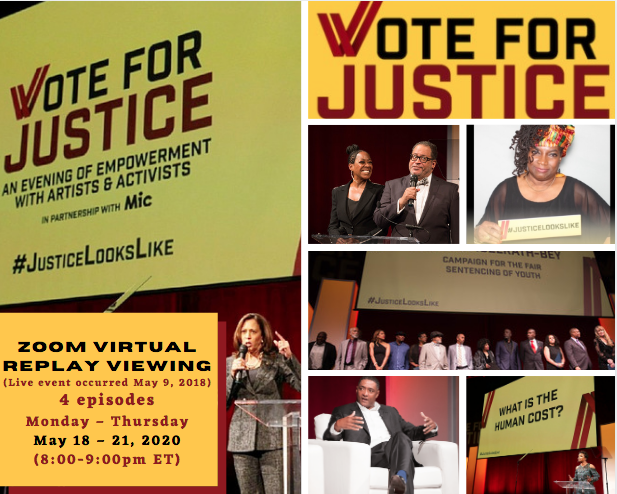 Vote for Justice: An Evening of Empowerment with Artists and Activists was hosted by the Justice Roundtable and held on May 9, 2018 at Washington, DC’s iconic Newseum. The event brought together artists and activists to contribute to energizing the growing movement for criminal justice reform. The evening was a high profile multi-media experience combining music, performance, panels, screen clips, spoken word and song. It was inspired by the personal stories of impacted people and helped to sharpen and amplify a narrative change that slashes mass incarceration, reunites families, and strengthens communities.

Relax, kick-back, unwind and enjoy a virtual viewing of this momentous event, one hour each evening during the week of May 18th as the Justice Roundtable takes Vote for Justice to the Zoom movie platform.

VOTE FOR JUSTICE
An Evening of Empowerment with Artists and Activists
(Live event occurred May 9, 2018)